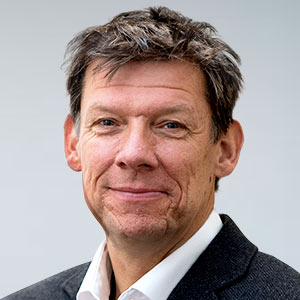 Bart-Jan Korteling joined Polyganics in 2015 as Chief Technology Officer. For over 25 years, Bart-Jan has worked in the medical device industry covering a range of activities including research, product development and project management. He has focused in particular on technology, design control and design excellence.

In his current role, Bart-Jan is responsible for the development of new technology platforms, new innovative products and new applications. Alongside his activity at Polyganics, he has worked on a consultancy basis for various medical device companies, coordinating a broad range of projects over the last decade. This included the development of a new concept for Ophtec and leading projects for Advanced Cardiac Therapeutics and Corvasco, as well as being senior project manager for Polyganics in 2015.

In 2011 Bart-Jan was employed as Managing Director and Director of R&D at Alvimedica, a medical device manufacturer. During his term, he instituted a new R&D facility. Prior to Alvimedica, he held employment at two Johnson & Johnson subsidiary companies; Cordis Europe and Biosense Webster. Bart-Jan worked twice at Cordis Europe, originally as a senior engineer developing catheter-based custom-made devices and later as the lead on several cardiovascular projects, taking on more senior management positions. Between terms at Cordis Europe, Bart-Jan joined US-based Biosense Webster as Manager of R&D, where he introduced various new electrophysiology catheters & accessories.

Bart-Jan is a Co-founder and Board member of the Springboard Association established in 2008. He holds a Bachelor’s degree in Mechanical Engineering from The HU University of Applied Sciences Utrecht.

back to Management Team
Raoul Beex